Medusa is perhaps one of the most well known characters from Greek mythology. Having snakes for hair and the unsettling power to turn victims into stone if they look her in the face, she is certainly a terrifying creature. Her image has been seen in a number of films, video games, and comic books, and now Next Gen studios have inserted her into a slot game. But is it any good?

The first thing a person will notice upon playing the Medusa slot game is that there is a great deal of spooky ambience. From the sound of howling wind to the sharp cracks of lightening, you would be forgiven for thinking this was a horror game. Medusa herself looks suitably alluring, pictured as a beautiful woman with enchanting eyes. But divert your eyes a few inch upwards and you’ll see that those eyes come with hissing green snakes.

The Medusa slot game uses a five reel, 25 betting line system. As can be be expected, the betting lines are adjustable, and may be raised or lowered via the buttons on the user interface. Creating matching sequences on the reels will result in payouts being made, which is also to be expected. The game really comes to life, however, during the free spins feature, which involves Medusa pictured as more alluring, and more terrifying, then seen in even the darkest movie depictions. 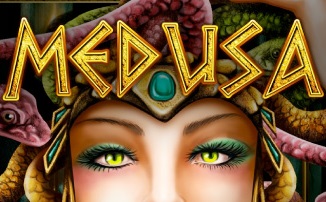 It is not just Medusa that makes her way over from Greek mythology, although she does feature as the wild symbol. Be sure to catch the animation that plays when she lands in a winning sequence; its enough to turn your blood to ice.

Some of the other characters that make an appearance are Pegasus, the winged horse, and Persius, the half man half God who finally cut medusa’s head from her shoulders. Both Pegasus and Persius are bonus symbols, which will be discussed later. Needless to say, however, the story wouldn’t be complete without a hero and his trusty flying horse to appose the monster.

If Medusa matches with herself at least three times, she will turn horrific and her eyes will light up. This indicates the player being turned to stone. Whatever will they do now? Interestingly, being turned to stone also seems to be a blessing, since it grants 10 free spins. During the free spins Medusa becomes a stacked wild, meaning that she occupies three spaces in the reels, from top to bottom. How gorgeous she has suddenly become. Her new appearance means that matching sequences are far more likely to be created, which is certainly a positive side of the snake lady.

If, during the free spins, Persius appears on the reels, he will act as a further extra wild symbol. Any matches created with Persius pay out three times the normal amount. Pegasus may also appear on the reels during free spins, and if matching three times will grant 50 times the current bet. Who knew that being turned into stone could be such a lucky and lucrative event?