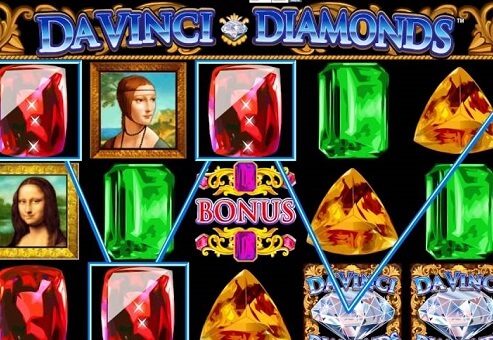 The famous artist and inventor Leonardo Da Vinci was definitely a genius and born way before his time. Fortunately for him and humanity the designs, inventions and artworks he produced were for the most part recovered and have since added a considerable degree of art, culture and even science to out stored knowledge banks as a species. Nowadays, having learnt and mastered a lot of the science behind this great man, it is the art and culture that he propagated that has remained untarnished and perhaps only grown in value. This is where this DaVinci Diamonds online slot game from IGT comes into the picture, with a theme that practically pays homage to these artworks and of course the man behind all of it.

The theme of this slot has been quite well perpetuated on the reels of this game and create an overall sense of designated culture simply by looking at a few of the wondrous art that has been installed in this game. Gameplay wise, this slot has a set of 5 reels, 3 rows of symbols and 20 fixed pay lines to take advantage of. The betting options available with this online slot from IGT games are also fairly broad and wide reaching, so as to increase the scope of player able to join in the action. There are also a couple of bonus features in store for players of this slot, with the likes of Wilds, free spins and even some cascading reels.

With a name like DaVinci Diamonds, players might get a little confused at what angle the theme is trying to take. The reason for this is that the title is itself a bit of a metaphor, because whilst players will find a fair number of shiny jewels and gemstones scattered around the screen and on the reels, the diamonds actually being made mention to are the artworks of this great painter that have been included in this slot game. In light of this the plain backdrop, subtle sound effects and otherwise relatively simple atmosphere propagated through theses aspects makes the game seem cultured as opposed to lacking.

The symbols on the reels of this DaVinci Diamonds online slot game are what really give the theme a kick. This is because not only do the reels take up a significant space on the screen but the players’ focus will be ultimately directed towards this aspect of the game as they pursue some of the jackpots available. The symbols found here include various gems, in place of the more commonplace playing cards, and of course a few of the better artworks the world has ever seen.

The first bonus feature to take note of in this DaVinci Diamonds online slot from IGT games is the cascading reels, which, when a winning spin is landed, removes those symbols and adds additional one onto the top, cascading the symbols down and allowing for potentially even more wins.

Like bonuses at https://canadiancasinosites.org/bonuses, there is also a free spins feature to this slot, which can be quite rewarding. Land 3 bonus symbols on the first 3 reels of this DaVinci Diamonds online slot to trigger this feature. There are no multipliers involved but the cascading reels will still tumble during this feature so wins may very likely be imminent.